I’m a lover & collector of Toronto history. I enjoy finding interesting things about the people and the neighborhoods that surround me. It has a grounding effect on me and, at the same time as a writer, local stories paint a magical mural for me to set my own stories in.

I rediscover Toronto & discover cities I visit by wandering off the beaten path through the guides of books. I read “Down and Out in The Magic Kingdom” by Cory Doctorow before my family trip to Disney World this past February. It had been a childhood dream to visit the park (as evidenced in this video of me ditching my daughter and crying like an idiot after seeing Cinderella’s Castle for the first time: http://yfrog.com/mwrrsz). Although it didn’t provide a guide for me, major scenes in the book set a tone for my visit.  There was a bit of a debate on our last day there whether we’d check out the Hall of the Presidents or ride Space Mountain as our last attraction. In the end, my husband took the challenge of both kids on Space Mountain while I stood in a sort of surreal state of awe at the animatronic American Presidents with an added sci-fi flavour.

This past spring, after reading Patti Smith’s “Just Kids,” I went on my first trip without the children to New York City. I bookmarked and traced all of the hangouts, bars, buildings and historical landmarks that Smith had been to or talked about in the book. I sat in the Hotel Chelsea where Smith observed the world changing rapdily around her. I ground my shoulders and back into the brick wall in the now gone CBGBs alley walls. Seeing and feeling so many things for a city I never lived in, left a haunting mark on me.  I felt connected to the city somehow and in the process, ended up falling in love with it as well. I discovered areas I wouldn’t have, had I stuck to the regular tourist tour. I got to know the city and in some way the city got to know me as well by leaving me with a hunger to go back. I’ve vowed to visit once a year and live the experience again. Since then I’ve read so much on New York, that it’s become more of a one sided pen pal relationship with the city in my readings; that is, until I’m formally introduced to its boroughs next year.

I discovered Chicago through walking it in preparing for its marathon. Luckily for me, my two companions had been there before and it wasn’t as daunting a task as I thought it was going to be. While there, I read a few stories in a copy of “Chicago Blues” a collection of short stories edited by Libby Fischer Hellmann. It was in a set of  books on Chicago aptly provided in the shelves of my hotel room. A couple of nights, while on my own, I wandered the side streets in between the city’s giant skyscrapers. I placed myself in one of the book’s stories called “Lower Wacker Hilton.” I got some awesome chills from one of my adventures and found respite for a while in a sleepy coffee shop a few blocks from my hotel. I sat and read while the city droned on outside the shop window. I paraphrase Dana Carvey in Wayne’s World when I say, it was like being in my living room, only that wasn’t my living room. I felt encapsulated by Chicago, as a film noir character being swallowed up by the story and my experience, and the feelings of impending pain from the upcoming marathon all at once.

This little bit of travelling with books has ignited a huge love of books set in my home city of Toronto. Sean Dixon’s “The Many Revenges of Kipp Flynn“, Guy Gavriel Kay’s Fionavar Tapestry, and Alissa York’s Fauna are just of few of the works that have spiced up my view of the city as of late. I’ve run through parts of Kensington, the University of Toronto and walked through the Don just to feel the books, the characters (particularly Kipp, Kimberly Ford and Lily), and see Toronto in a brand new light. 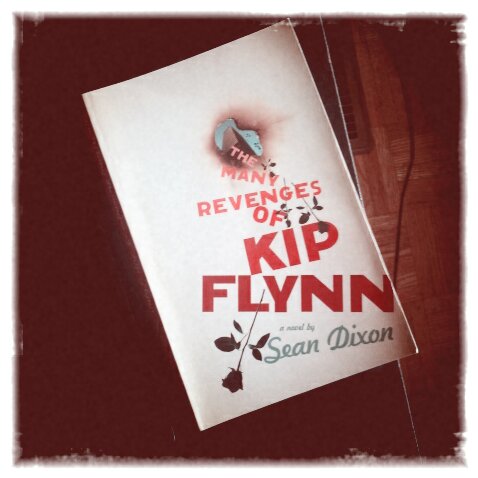 I grew up reading a lot of Gabriel Garcia Marquez and Jorge Luis Borges. My parents made it a point that if I was going to be the girl with a book stuck to her face, I might as well be reading some of it in Spanish. Magical realism, therefore, has its hook on me regardless. Thus books like Dixon’s, Kay’s, and York’s are set in familiar reading territory for me. Reading them gets tied into how I’d arleady been viewing my surroundings through books. I used to see my mother’s kitchen and family gatherings through the aromas and supernatural ideas that permeated my family home. Now I see my city through its quirky real life characters and its historical colourful conflicts.

Reading Amy Lavender Harris’s “Imagining Toronto”, Liz Worth’s “Treat Me Like Dirt,” and “Stroll” by Shawn Micallef, inspired me to start a twitter called @Torontolgy. Still in its infancy at 25 followers, it is loosely based on New York City’s @Newyorkology, Torontolgy gives quirky and interesting tidbits of the city’s history I’ve found through walks, reading, and Toronto web sites. As Torontonians, we think little of the historical importance of our city until it is either threatened or when it’s compared to other (bigger) cities. We tend to praise Toronto in an almost apologetic sort of way, unless, that is of course, if we aren’t too busy complaining about it. Books like “Stroll,” invite Toronto to discover itself and to finally feel free to love itself. In this process of acceptance, the city’s people are invited also to get more involved with its ongoing cultural and recreational discourse by talking about and walking the city streets, parks, and discovering its many unusual quirks, dark nooks and interesting crannies.

I’m always mentioning my sadness that there doesn’t exist a plaque in front of Varsity Stadium declaring, “THIS IS WHERE JOHN LENNON & THE PLASTIC ONO BAND PLAYED LIVE PEACE IN 1969,” or another one outside the Maple Leaf Gardens site saying, “ELVIS WORE HIS GOLD LAME SUIT HERE FOR THE LAST TIME IN 1957.” Chicago is covered in historical plaques, and even though Toronto is way younger than Chicago, we should at least be keeping track of this history in a more concrete way. Of course, I’m treading dangerously in the area of comparing Toronto to other cities here, so I digress.

I would really love for Toronto to look at itself with historian eyes. I would like Toronto to be aware of its magic. After I dropped my son off at a gamercamp yesterday, I had four hours to kill. I delighted in wandereing up Yonge Street, remembering the head shops I used to frequent, the arcade I used to haunt, the tiny hole in the wall hair salon where I had my hair dyed purple for the first time, and the little stores where I used to search for Sailor Moon paraphernalia. That was when I was a young yellow-tinted glasses-wearing-Treble Charger-loving thrift store hunter, or what now most would call, a hipster. I was hipster before hipster was even a word, man (Ok, don’t quote me on the hipster bit since I could be wrong. Maybe you’ve just heard of it!). I’d skip school, put on my blue plaid pants with those yellow glasses, and take myself to an indie movie at the Cumberland, Uptown, University or the Towne Cinema (damn I miss that theatre underneath the Bloor and Yonge**). Three of those theatres are now long gone, but I still look at the areas and buildings that used to house them with heartwarming memories. When I was a kid I watched Superman for the first time at the Uptown, cross-legged  with a giant bag of popcorn on my lap on the stage. That bag was bigger than me! The most memorable thing about that day wasn’t just the beginning of my life long love affair with the story of Superman, but the fact that my mom bought us tickets for the next showing before the movie was even finished! I saw Superman two times with my mom that day and it stands out still, and may forever stand, as one of the best days of my life.

Yesterday I took a very nostalgic walk on a street I’ve walked, even run through, many times before. I saw it through bits of factual history, fantastical characters and new scenes in the budding stories I write as well. Toronto is continually changing, as every city should. Like language, the city is a living, breathing and evolving being. Demoltion and building and rebuilding is a part of its growth, just as, and some may argue this, slang is a part of a language’s evolution. I believe, though, that we need to step back, among all of its fast progression, and take in, and take note of, all of our cultural and personal histories.They make us who we are: Toronto is a vibrant, important capsule containing many living worlds within itself. We are a gathering of thriving villages struggling in a rapidly expanding metropolis. Let’s sit back and reminisce about its foundations once in a while.

Just one of the little things I found while walking yesterday.

There are a collection of books and novels about Montreal and Ottawa that are awaiting me as soon as I zip through “Stroll” again and “The Girls of Murder City” by Douglas Perry. The Girls is a book about the women that inspired Chicago: the Musical. Quite an adventurous read since it’s a fictionalized story set in facts. I’m also currently re-reading, as I’m always re-reading books, some Margaret Atwood and old Canadiana classics from school with a distinct eye out for Toronto settings (also, thanks to Vicki Ziegler and her reading list at the great Canadian Bookshelf – do yourself a favor and check out all the reading lists while there. Talk about home and setting!). The more I read, the more I find, the more I find, the more I get to know, and live cities through its books and its walks (and if you know me, through running and cycling through them too). 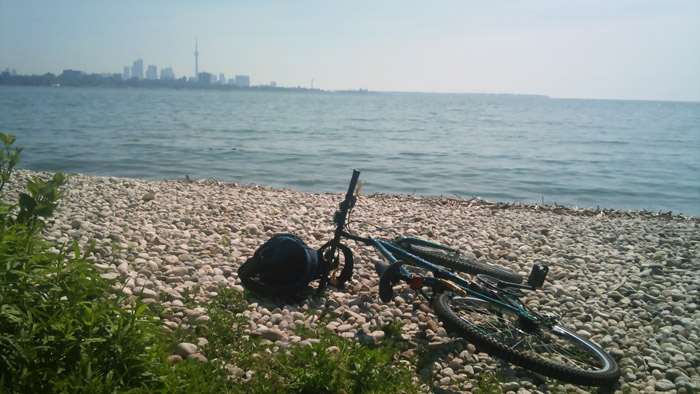 **The Towne Cinema: On one of our field trips in Grade 11, my school, Madonna High School, took us to a showing of Mel Gibson in Hamlet at the Towne Cinema. That’s where I met the ticket agent lady, to be soon known as the Beehive Lady. I called her that because even in the 90s it was kind of rare to see anyone in a pinkish beehive hairdo. Our teacher asked to purchase tickets and in an accent I had (and to this day), never heard before she yelled out, “HAMLET?! That’s not in this theatre! It’s in the OTHER theater!” She slammed her little window shut and left the booth. Our teacher and I laughed for a good long time before realizing that we were in fact in the wrong theatre. It was playing at the Cumberland nearby.

I also remember taking my sister there to introduce her to Beehive Lady and to watch Pee Wee’s Big Top in the theatre filled with screaming school children. I can’t pass the exit of the Bloor and Yonge subway station without looking at the wall that housed that booth and the entrace to that theatre. It smelled like Cheeze-Its, but they were always out of them.

Many thanks to all the authors who have guided these adventures…..so far.