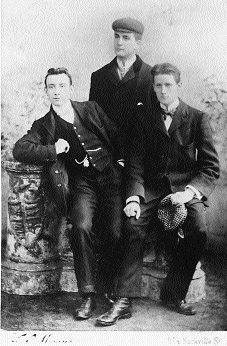 A young James Joyce (cap in hand) with two of his university class-mates, George Clancy and J.F. Byrne. Clancy (Davin in Joyce’s A Portrait) was Mayor of Limerick when he was killed by Black and Tans during the War of Independence. (Morris Library, Southern Illinois University, Carbondale)

I have work to do and a backlog of housework to get to, but I thought the occasion needed to be noted.: I’ve passed the one hundred day/page mark with the re-type of Joyce’s Portrait Of The Artist As A Young Man. I’ve reached a meaty bit and I guess the best way to illustrate it would be with the page I wrote today (page 107 of the Penguin Modern Classics Edition, 2000).

“A trembling seized him and his eyes grew dim. The yellow gasflames arose before his troubled vision against the vapoury sky, burning as if before an altar. Before the doors and in the lighted halls groups were gathered arrayed as for some rite. He was in another world: he had awakened from a slumber of centuries.”

Going back to the beginnings of the book and reading the above, the writing has gone from stilted and simple to a streaming romantic language. There’s a great deal of description in setting. Joyce uses this as both a metaphor of the changes within Stephen and also as a means of shyly procrastinating in describing the inner pubescent turmoil of Joyce/Stephen. Think of it this way: when a child asks you something that they’re a little embarrassed about asking, they go about it in this roundabout way until you have to gently ask them to get to the point. This is sort of what I’ve seen Joyce do when describing hyper sexual thoughts that come to Stephen’s mind. Read back to his first encounters with a girl named Mercedes (I love that name), and the overly romantic language he uses, it is all intermixed with his great feelings of despair and doom; as if just longing to be with her makes him question everything in life.

“he told himself, another Mercedes lived. Both on the outward and on the homeward journey he measured distance by this landmark: and in his imagination he lived through a long train of adventures, marvellous as those in the book itself, towards the close of which there appeared an image of himself, grown older and sadder, standing in a moonlit garden with Mercedes who had so many years before slighted his love, and with a sadly proud gesture of refusal, saying:

I love Shakespeare, but hate the story of Romeo and Juliet. It’s not real. It’s two kids who fell in lust with each other and died because nobody listened to them. It wasn’t love. In Portrait, Stephen lusts for this girl and uses words of love to describe her and his reactions to her. It’s like reading young adult and giggling, but it’s realistic because of how Joyce has set it up: Stephen from boy to young man, to young man expressing needs and since all he knows is what he’s read (his love of the poetry of Byron and Cardinal Newman), he describes lust as love.

“Her room was warm and lightsome. A huge doll sat with her legs apart in the copious easychair beside the bed. He tried to bid his tongue speak that he might seem at ease, watching her as she undid her gown, noting the proud conscious movement of her perfumed head.”

Today Stephen Dedalus has visited a hooker. I’m not sure, but I suspect he’ll visit more because, as I said, Joyce has written this in a very linear fashion; one where you are practically inhabiting the body of Stephen and if you’re older than he is, you know what’s coming. I can’t tell you how excited I got about typing these passages and stopping to re-read them; mostly because I feel that as a reader, the book is getting somewhere. Stephen has gone from a nice obedient, yet questioning boy. It’s shown he’s brilliant, but we’re getting to the point where he questions everything. It’s all sparked by his observations of his father’s questioning of the church and Stephen’s inner struggle with lust. He lusts for everything. He finds it sinful, but necessary that he has to explore beyond what he knows. The prose goes from forced to flowing like travelling on a tight dusty trail with constant stops and suddenly finding yourself in a vast green field of forever.

The bigger thing, besides his troubled pubescent mind, is his growing resentment for his father. Just looking at his dad gets him angry or upset. I remember that age. There’s something inexplicable about that hatred. It comes out of nowhere and you feel no sense of guilt for it until reason hits you with it. There have been a few moments where I’ve been transported through time and realize full well what Stephen is going through. Since he’s questioning everything, his foundations, everything he’s relied upon up to this point, it’s all falling apart. It’s no wonder he’s going all “taxi driver” in his wonderings of the world and the space around him.

He’s still creating compound words and repeating words, even sounds (dismayed…arrayed), as if he read them in a book and said, “I like this word, ” and reuses it to cement it in stone in his head. It’s what a lot of mega-readers do. Sometimes Joyce uses words that seem out of place. Although I know you can use the word “copious” to describe an easy chair. I don’t think it would the first choice of an author use that word, but there it is. I’ve noted a few more occasions on this half of the book where he’s used words that seem out of place (I will go back and footnote that at some point).

On the next round of updates I will give you a low down as to how it’s affected my own writing. Let’s just say that Joyce has been a bit of an insidious beast.

Okies folks. I got a house that needs tending, but that’s the state of this project now on day one hundred and five.

Getting Inside James Joyce’s Head:  http://gettinginsidejamesjoyceshead.blogspot.ca/