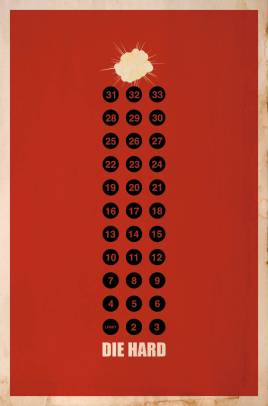 She’s got a CB on the table and ON, and her cop’s notebook is  out again.  She’s already upgraded the NUMBER OF TERRORISTS?   to “12 (?) minus 3 = 9” and added other information.  As she speaks she takes ammo clips the dead women dropped, their sidearms, etc.

JANE MCCLANE Gee, I’m sorry, HELGA, nobody gave me the message. You shoulda put it on the bulletin board. Anyway, I thought you and Francis and Sonia and the other girls might be lonely, now that I waxed Tanya and Olga and their buddy. So I invited some of the girls from my card game.

In the office, the terrorists REACT, startled, as JANE MCCLANE name-drops.

FRANCIS How…how does she know so much  about —

HELGA (waving for silence) Ah, how nice of you to call.  I assume you are our mysterious party crasher. You are most troublesome for a…security guard?

JANE MCCLANE (into CB) BZZZ! Sorry, HELGA, wrong guess. Would you like to go for Double Jeopardy, where the stakes are double and the scores really change? She rolls Heinrich over and is delighted to find a pack of Gauloise’s in the woman’s pocket. She takes them, pats the woman’s face.

JANE MCCLANE (sotto, to the body) Bad for your health anyway.

HELGA Who are you, then?

JANE MCCLANE Just the fly in the ointment, HELGA.  The monkey in the wrench, the pain in the ass –

JANE MCCLANE STOPS in mid-speech. She’s just opened the kit bag Heinrich had over her shoulder when she died. Now JANE MCCLANE takes out the contents…dozens and dozens of EXPLOSIVE DETONATORS marked “DANGER” and a CHUNK of cello-wrapped  PLASTIQUE the size of an electric razor.  She WHISTLES in surprise to herself.

In the office, HELGA turns off her mike for a moment, turns to Sonia.

HELGA Check on all the others…don’t use the radio.  See if she’s lying about Olga  and find out if anyone else is missing. She moves.

HELGA goes back onto the CB.

Meanwhile, JANE MCCLANE SMILES at the tell-tale STATIC as HELGA goes off and on. She knows what’s happening.  Now, she starts to walk down a corridor, eyes PANNING FROM elevator to the stairwell doors.

HELGA  Mystery Guest.  Are you still there?

JANE MCCLANE I wouldn’t think of leaving, HELGA. Unless you want to open the front door…?

HELGA I’m afraid not.  But you have me at a loss — you know my name, but who are you?

JANE MCCLANE (scornfully) Just another American who saw too many movies as a child.  Another orphan of a bankrupt culture who thinks she’s Ellen Ripley…Wonder Woman….Sarah Connor

JANE MCCLANE Actually, I was always partial to Matrix’s Trinity.  I really dug her boots. Like a punk cowgirl.

HELGA Do you really think you have a chance against us, cowgirl?  A LIGHT blinks on the elevator.

JANE MCCLANE goes quietly through the stairwell door and is gone  by the time the search party steps onto this floor.