In the afterglow of seeing the Genesis cover band, The Musical Box, I find myself full of heart. Therefore, in lieu of lambasting my social media channels with all things Genesis, I think I’ll write down my thoughts here. I’m on two hours of sleep (had to send off my son on an overnight school trip to Quebec and had been up for a friend’s party after the concert), so pardon if this all comes out as gibberish. I will do my best.

When I was about seven years old, my parents bought me a little blue and white transistor radio. It kind of looked like this:

I used to carry that thing everywhere and my last memories of it were when I was 9/10 and lived in Windsor (this was at a particularly hard time in my life. I wouldn’t say I had a bad childhood, but a trauma(s) back then tainted all things dark for me in that time period). I was in the school playground at St. Alphonsus, and the song, “The Lamb Lies Down On Broadway,” came up. It was memorable enough that, although I didn’t know who sang it at the time, I kept remembering it.  Later on, while in the library I remember looking up “On Broadway,” and thinking that it wasn’t the same song I had heard on the radio.

Fast forward to about grade eight and I had become a fan of Peter Gabriel‘s music. I had bought his first two albums on tape with my allowance after hearing, “Games Without Frontiers.”  I didn’t have access to a computer then and the internet wasn’t what it is today. If you needed information on bands, you either needed to talk to people who knew things about music or research in the library or magazines. My parents got me these two books for my birthday the year Gabriel’s album, “So,” came out. 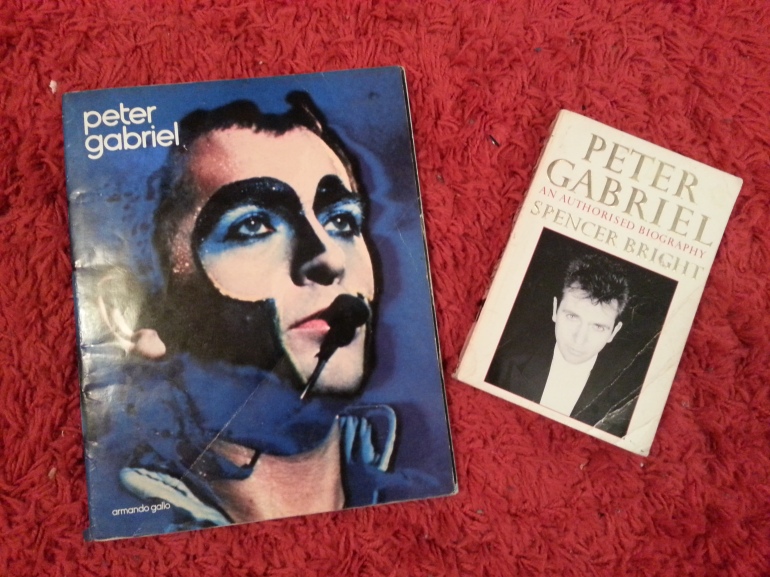 That’s when I learned that Gabriel was in Genesis. I gobbled up all that information and was enthralled by the theatrics, the musicianship, and the spectacle of pre-1975 Genesis. It also left me with a bit of sadness since I was too young to have seen them live back in the day. It was when I was watching the New Music around then that I learned that Genesis had come to Toronto and performed The Lamb Lies Down Broadway. Wait. What? Broadway?

That’s when it clicked. I sought out all things Genesis on tape and found The Lamb. The biggest wave of nostalgia, the missing transistor radio of my past, hit me like a brick and I remembered good things out of the bad in my past. Before I knew it, I had memorized all the words (all twenty minutes) to Supper’s Ready and had become a Genesis mega-fan. By then I had already started a tiny correspondence habit (no it wasn’t tiny) with Peter Gabriel’s secretary at Real World Studios. Gabriel didn’t have a fan group or anything set up, so his very awesome secretary, Penny (and afterwards, Tina), used to send me copies of the Gabriel newsletter the Gabbler Ratchet and song lyrics. They became my only pen pals in a time before the internet. I lost touch with them as I got older and distracted with new things in my life. I also went through a whole The Police phase during that too.

Music had always been more of an escape for me than movies were back then. My social life consisted of school, my walkman, books (during my two hour commutes to the UofT campus in Mississauga or home), and movies (while skipping classes at the downtown St. George campus). I’d make up stories from pre-1975 Genesis songs before ever seeing concert footage. Then youtube came along and changed all that. I watched footage after footage and even the band’s television performances which were full of the same drama as their legendary concerts.

I can pinpoint a few things that made me a fan. The sets spoke to an internal seventies nostalgia that is reminiscent of a lost love in my past: my childhood (memories between the ages of 4 and 8 years old). The seventies for me were of puffy brown and yellow snow jackets, big Cougar boots, and long hair. They were a time when my dad sported a huge afro, my mom had colourful flower blouses, red elevator shoes, and our home was decorated with orange leather furniture. We had a black and white television in my parent’s room where we would pile on the bed on Sundays while my dad watched sports and sneaked the channel to cartoons when he’d fall asleep. He’d scold me and say, “My eyes are closed, but I’m still watching!” I’d laugh and try to pry his eyelids open.

I used to own a tulip hat (much like Gabriel sports in The Lawnmower skit he does before singing, “I Know What I Like“), and wear that thing to pretend I was a flower in garden. I had skirts that would twirl up if I spun around. I had plastic pretend food that I’d pretend to make on my Easy Bake stove/oven combo.

Tony Banks‘s distinctive sound (Korgs, Wurli reverbs, Mellotron, etc.) spoke of the imagination of the times and the promise of something beyond the things that would spark the stories that I used to make up as a kid. Mike Rutherford‘s and Steve Hackett‘s complex guitar solos were like audio math magic. Phil Collins‘s drums were always easy to pick out, but back in pre-1975 Genesis he had brilliance born out of angst; you can’t find stuff like that in his solo and post-Gabriel Genesis work. And Peter Gabriel…the vocals and his lyrics came from rich school boy existential catharsis: it’s a romantic ethos that’s both intriguing and inspiring. Imagine putting Lindsay Anderson’s If… to music, and then you’ve got a young Gabriel voice. Some may call it angelic, but I call it cosmic. As the albums got bigger and the lyrics more obscured, the songs were refined and stand as a classic example of progressive rock run amok. Think of King Crimson on acid with a dose of political commentary and sex. Yes, even more than what Crimson already are; that’s pre-1975 Genesis. They were as subversive as their sets were elaborate. Gabriel’s costumes elicited feelings of dread and arousal for all.

So it was with great fascination and jealousy that I heard some friends comment one day that they had seen The Musical Box live at the Danforth Music Hall last year. We got into a nice discussion of favourite Genesis songs and what pieces they performed that night. Then out of the blue, one of them remembered that they had a second date in January at the Mississauga Living Arts Centre. As soon as I got home that night, I grabbed a ticket. Having not taken Mississauga transit since the nineties, I didn’t know how I was going to get there and get back home, I just knew that I was going.

Last night I did! I found my seat between two older couples. The whole venue was full of a different demographic for me. At forty, I was surrounded by hardcore older Genesis fans, people who had actually seen them in concert when I hadn’t heard of them yet. Before the concert started I gulped down my stranger anxiety and turned to my seat mates.

“I apologize now if I scream or cry tonight. It’s been an impossible lifetime dream for me to see Genesis live.”

A lady in her sixties beside me, hoisted up her beer, and said, “Well darling, this is the next best thing. You’re going to love it.”

As the venue darkened, the organ slowly marched into our ears, and a Gabrielesque silhoutte with batwings and glowing yellow eyes appeared. I was transported to 1973, the year I was born, when Gabriel stepped on stage and performed “Watcher of the Skies.”

(There’s more in the set above. Sit back and enjoy that.)

I thought I had travelled through time and there were goosebumps on my arms. This Montreal ensemble had made an impossible fantasy/dream come true. I wished throughout that they’d perform all of the pre-1975 Genesis (they were SO ACCURATE), especially Supper’s Ready (and guess what, they performed that too, all twenty minutes of it!). I sang along. I know every trill, every guitar pick, every chord of their songs in my head. It’s part of the bank of popular useless information, only its the kind that is useful to me. It grounds me when I need a friend. It tells me that things were good even when they felt so bad. It’s the part of my brain pre-1975 Genesis dwells in and it will never leave because I never want it too.

I feel somewhat similarly about other bands, but it’s never been quite the same as pre-1975 Genesis. I used to make mixed tapes of their music for all my friends regardless of their tastes because I loved the band so much and I wanted to know more people that did too. Last night, as I was singing along, others were too, they even knew the Gabriel chatter in between guitar and set changes. It made my year and the  year just started. It would be interesting to see what album they bring back to life the next time they come back. I definitely want to catch The Musical Box again.

Now if only there were a Magma cover band….